The efficiency of traditional manufacturing solar cells has improved a lot with an efficiency of up to 22% commercially available in the market from PERC solar cells, IBC, HJT, and shingled crystalline cells. Out of the wide range of different cell structures, contact passivation has been a great area of interest for several decades, particularly TOPCON cell technology.

The idea of TOPCON technology is that the metal does not come into direct contact with the wafer. TOPCON has an N-Type Silicon substrate and a thin tunneling oxide is applied, followed by a layer of highly doped with n or p poly silicon that contacts the metal at the ends. These tunneling oxide blocks one type of carrier and thus they are called passivating contacts. Compared to the Heterojunction technology (HJT) which has both amorphous and crystalline thin film the manufacturing process is completely different compared to TOPCN technology which is just one upgrade from the PERC structure by just adding a passivation oxide layer. By changing the substrate material from P-Type silicon to N-Type silicon material the existing PERC line in the market can be upgraded to TOPCON structure by just adding the tunneling passivation layer. This means there are capital/manufacturing costs compared to other technologies like HJT /IBC (interdigitated back contact) which requires a different type of architecture, which will be lower.

A typical crystalline solar cell is made of N-type and P-type semiconductors as substrate material. If you want to know more about how are solar panels made reference to one of the previous articles here “Solar Panel Manufacturing”.  In TOPCON technology the cell is passivated by an Aluminum oxide (Al2O3) fine layer on the surface of the P-type material and contains a very fine layer of about 2 nm Silicon dioxide (SiO2) tunneling layer and a highly polysilicon thin film below the SiO2 layer.  The important part of Topcon technology is that the passivation happens due to the tunneling thin oxide film and the highly doped polysilicon layer helps to attain the minimal amount of recombination.

In comparison with the traditional crystalline structure the TOPCON structure has

Figure 2 represents the fabrication process. The sequence of cell construction is shown below. The texturizing with potassium hydroxide (KOH) on both sides. After that using a boron tribromide (BBr­3) solution boron diffusion is created After cleaning with chemicals, a tunneling SiOx is thermally developed and a pure poly silicon layer is accumulated in an LPCVD system. The boron emitter is passivated with a film of the dielectric layer. The back side SiOx/n+-poly-silicon layer is covered with PECVD SiNx: H. The metallization contacts are screen printed on both sides[2]. 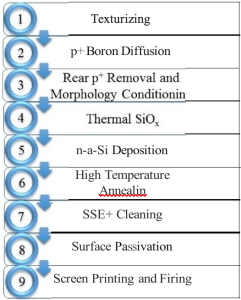 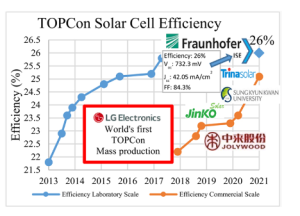 To compete with the PERC technology currently available in the market maintaining a high conversion efficiency in mass production is a key aspect. Although recent development has led to a gap in the efficiency between PERC and TOPCON cells, a proper standard process flow for TOPCON solar cells is yet to be established.