Latin America has historically been associated with warm weather and sunshine. Due to its favorable climate and abundant natural resources, Latin America stands out as a key player in the development of renewable energy especially solar. When it comes to installed capacity, the solar PV sector in Latin America is led by three regions mostly they are Brazil, Mexico, and Chile. The energy capacity of solar photovoltaics in Latin America has increased by more than 100-fold in one decade, surpassing 20 gigawatts in 2020. The article related to Brazil’s solar energy market can be found here. 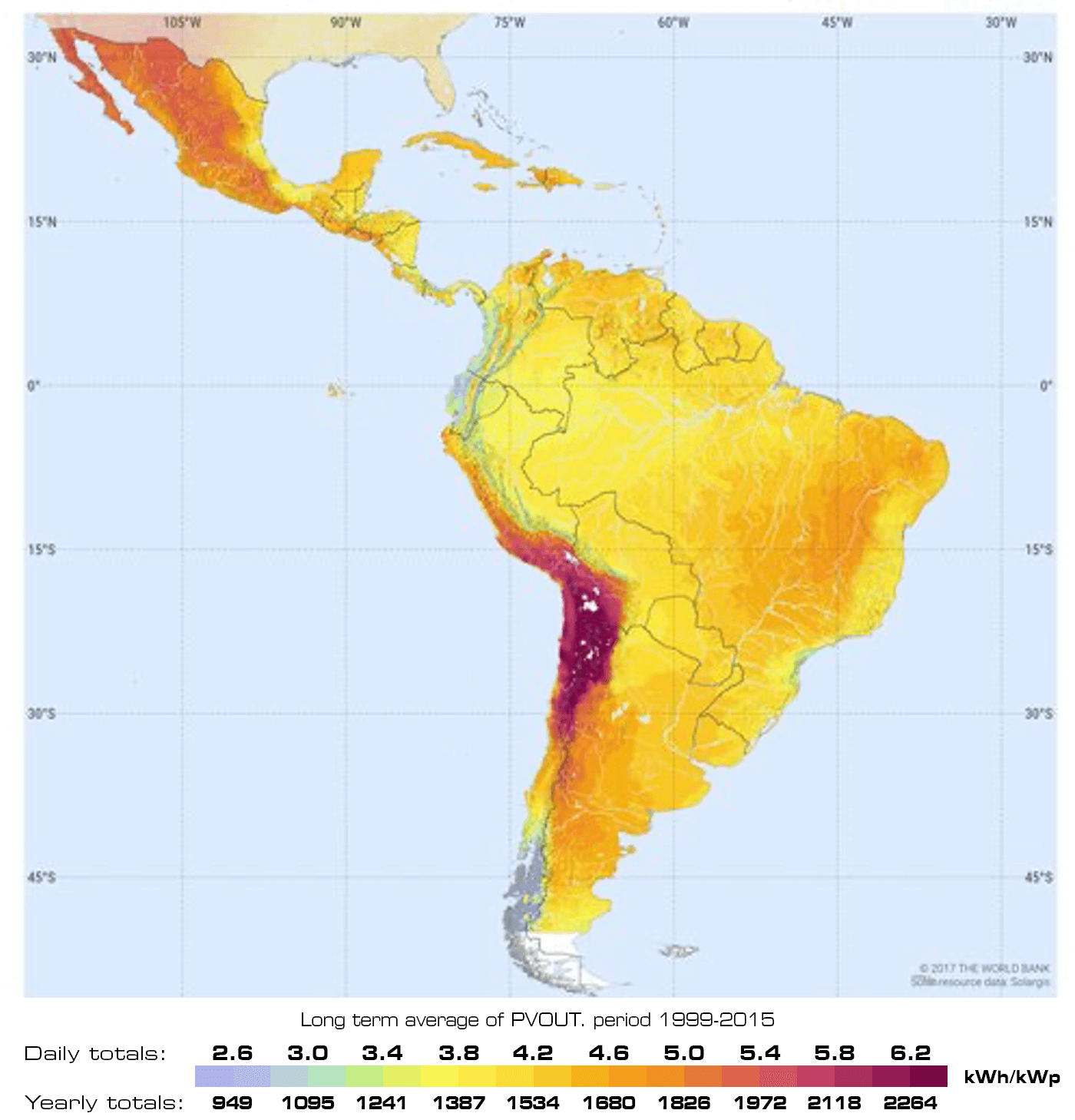 To start with, Brazil tops off the chart with the highest number of total installed PV capacity of 10 Giga Watts in 2020. This represented 40% of the installed capacity in Latin America that year. Mexico has witnessed strong growth in installed solar capacity, also thanks to a boom in distributed solar – it currently has more than 100 000 solar roofs on homes and on industrial and commercial buildings. Mexico has been on the fast track to generate renewable energy and meet the country’s target of 35% clean energy generation by 2024.

The Aura Solar I, in La Paz, Baja California state has one of the largest solar power plants in Latin America. Chile is another Latin American country that is leading the solar energy revolution in the region. In the past ten years, Chile has invested nearly $7 billion in renewable energy, with more than 80 solar projects. By 2035, Chile plans to produce 65% of its electricity from renewable sources, a percentage that will increase to 70% by 2050. The solar power plant in the Atacama Desert is the largest in South America. Shortly, the plant is expected to generate 196 MW of solar energy.

Peru started working on renewable energy projects in May 2013. Peru is currently implementing 49 renewable energy projects with a combined capacity of 1,080 MW across the nation out of which seven solar farms of a total of 280 MW are planned. In 2018, the total solar energy capacity in the country was an impressive 345 MW, more than the countries like Argentina and Uruguay. The Argentina Solar market is expected to grow in the next 10 years. More than half of Argentina’s territory receives annual average sunlight over 3.5 kWh/m2, which makes Solar PV a technically viable option to match the higher electricity demand.

In 2020 solar power accounted for more than 18.5% of total renewable power in Argentina. In recent years, the government in Argentina had invested $1.8 billion in producing clean energy and they are committed to increasing the renewable energy share in the energy mix of the country by more than 20% by 2025. Uruguay receives an average of 1,700 KW per square meter of sunlight a year, on a par with Mediterranean countries. In 2019, one percent of total energy production came from solar. Uruguay has put a strong emphasis on providing solar energy in rural areas. In 2015, Honduras' solar market was ranked as the second largest in all of Latin America. Honduras became one of the first non-island countries that have been able to use 10% of its solar energy for electric generation. Colombia’s solar installed capacity has reached 89.52 MW in 2019. Colombia is focusing on increasing the production of solar to around 1500 MW by 2022.

According to research done by Wood Mackenzie, average utility-scale system costs in major Latin American countries are expected to decline 9%. Mexico will have the lowest system costs of all the major markets analyzed, with Colombia and Chile close behind. Falling module prices means a reduction of system costs and with the increase in module power, this will also be a contributing factor to drive down the costs. However, it is also estimated that while falling costs will be a driver of future solar demand, major Latin American countries will face headwinds that will stunt market growth over the next five years. Strong new policy works and stable market conditions will play an important role to increase the growth of solar energy in Latin America.

A report made by the International Renewable Energy Agency (IRENA)titled “Future of Solar Photovoltaic” showed that the PV capacity of Central and Latin America alone could grow by 40 percent to more than 280 GW by 2050, thanks to high solar irradiation and by implementing attractive and strong political frameworks. Since the late 2000s, Latin America has seen a rapid and more diversified development of renewable energy sources one of the many reasons is the reduced local health and environmental impacts of renewable energy sources compared with fossil fuels because of their nature and more limited social and environmental impacts, solar PV generally has a significant advantage in terms of operational feasibility and social acceptability, as a result, there has been a steady increase in the installation of solar projects in many countries in Latin America.