PV systems produce energy at different rates depending upon the time of the year. As the intensity of radiation and angle of the sun varies through the seasons so does the power output of the system. The highest solar generation during the day is usually from 11am to 4pm. So, during this time, the PV system may generate excess electricity than required. This is where net metering comes into play also known as net energy metering or bi- directional metering is a kind of arrangement where the excess electricity that is produced and not being used will be fed into the electric utility grid. This billing arrangement is designed to compensate the system owners for any generation that is exported to the grid.

Net metering originated in the United and consumers who wanted to use electricity at a later time can use the electricity generated form the panels. The first net metering project was established in 1979 where apartment complex and a solar test house were in Massachusetts. Minnesota is commonly cited as passing the first net metering law, in 1983, and allowed anyone generating less than 40 kW to either roll over any credit to the next month, or be paid for the excess.

What is Net metering 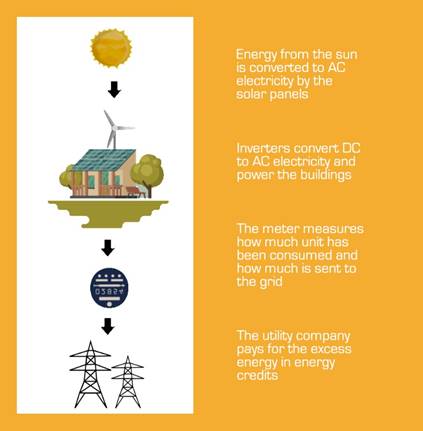 Recently hybrid solar systems have become increasingly popular. This combines the best from grid-tied and off-grid solar systems. These systems can either be described as off-grid solar with utility backup power, or grid-tied solar with extra battery storage. The introduction of hybrid solar systems has opened up for many interesting innovations. A concept called smart grid net metering method can be applied to the system. It is a net metering method; the main aspect is the use of a net metering controller.  This smart metering not only connects households and enterprises to the networks but also ensures the flexibility of energy management while ensuring bidirectional metering of electricity. This smart controller performs several functions like bidirectional technical and commercial electricity accounting, transmission of data on accounting of consumption and electricity generation to commercial and dispatch centres of network. This smart controller is able to control all the ongoing operation within the system and make appropriate decision for the energy saving of the grid. They have the ability to improve and enhance the capabilities of the energy sector. 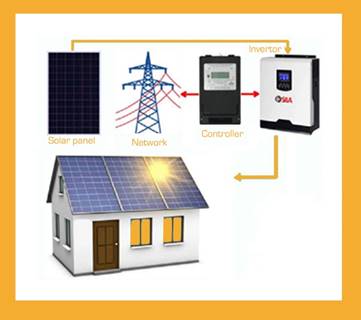 As the transition towards renewable energy becomes popular, so does the concept of community solar. Community solar refers to an alternative to rooftop solar for homeowners that either don’t qualify to have solar installed on their roof or would prefer not to have their own personal solar panels. Community solar is also sometimes referred to as “shared solar,” wherein homeowners collectively pay for a solar system that provides power to multiple households. With the rise in community solar, more home owners are becoming aware of a form of solar incentive called the virtual net metering.

It is a bill credit system for community solar. A community solar is usually a large-scale off-site system which is shared by hundreds of owners. A resident can either own a few of the community array’s solar panels or rent them in order to get discounted energy rates without having to make any up-front purchase. Issues like maintenance, warranties and equipment are not a factor with community solar, because all of those elements are handled by the owner.  In virtual net metering, the solar panels are not used by one household but rather by a community of shared people.  The energy credits obtained will be shared among the people who hold a share of the community solar. Similar to the on site net metering, the virtual net energy metering credits will vary depending upon policies in place.

While Net metering seems to be a good idea with the advantages mentioned above, it is considered controversial and it also has some drawbacks to it. One drawback is that many electric utilities state that owners of generation systems do not pay the full cost of service to use the grid, thus shifting their share of the cost onto customers without distributed generation systems. A 2014 report funded by the Institute for Electric Innovation says that net metering in California produces excess number of subsidies to typical roof top installed PV owners when compared to those who completely rely on the power grid for electricity. These subsidies must e then paid for by other residential customers.

As distributed PV markets are on the organisations have been experimenting with different alternative to finely calculate the cost factors and the benefits involved. Advancements in communications and smart grid technologies also enable more refined calculations of distributed generation value.