The PV industry is always exploring innovative manufacturing processes, new materials, solar cells, and modules designs to maximize the device performance and lower the final energy cost. One of the latest technologies that are finding its way into the consumer solar panel market is heterojunction solar cells. more manufacturers are starting to deploy this technology in their products.

This lower cost and flexibility in the type of materials that amorphous silicon can be deposited on are a couple of important advantages. With heterojunction solar cells, a conventional crystalline silicon wafer has amorphous silicon deposited on its front and back surfaces. This results in a couple of layers of thin-film solar that absorb extra photons that would otherwise not get captured by the middle crystalline silicon wafer. The HJT production concept was developed by SANYO Electric in the 1980s (SANYO was acquired by Panasonic in 2009). SANYO was the first company to commercially produce solar cells made of amorphous silicon. Heterojunction solar technology takes advantage of this by building a solar panel out of three different layers of photovoltaic material.

The top and the bottom layer are made up of thin-film amorphous solar cells, the middle layer is a crystalline solar cell.  The thin-film silicon on top captures some sunlight before it hits the crystalline layer, and it also grabs some sunlight that reflects off the layers below. It’s very thin, so much of the sunlight passes right through and the sunlight that passes through the middle i.e the crystalline layer is absorbed by the thin amorphous layer that is below. By building a panel out of a sandwich of three different photovoltaic layers, a heterojunction solar panel can reach efficiencies of 21% or higher. This is comparable to panels that use different technologies to achieve high performance. Figure below represents a typical HJT solar cell. 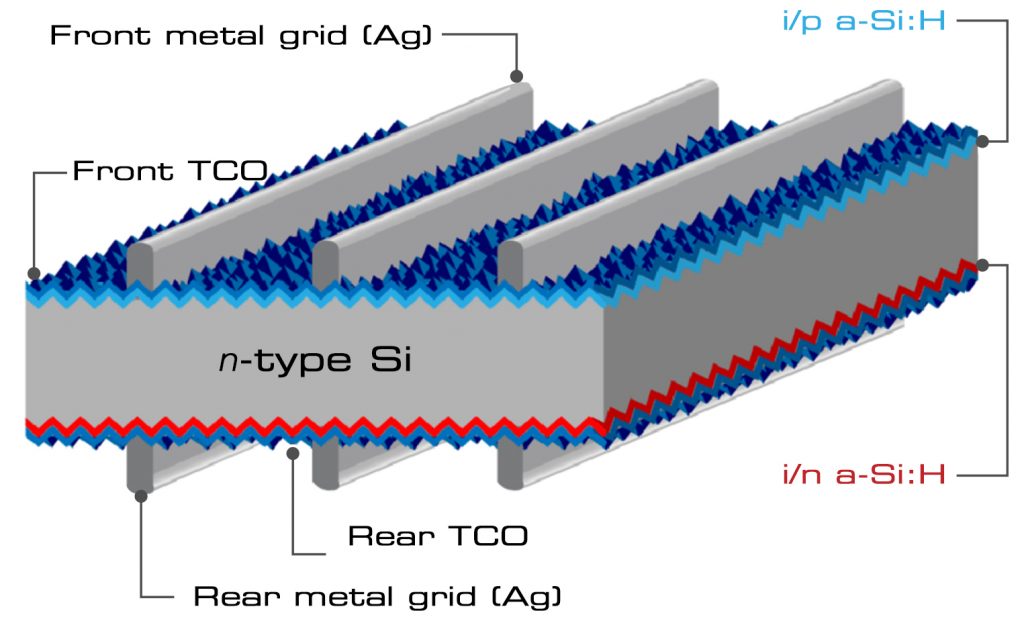 As shown in the above figure, it is a typical HJT cell with an n-type crystalline cell in the middle sandwiched between amorphous silicon on the front and the back.

The efficiency of heterojunction panels currently on the market ranges from 19.9% up to 21.8%. The figure below indicates the different available cell technology in the market. BSF refers to the Back surface field which i=has a highly doped region at the rear surface of the solar cells. Nowadays there has been a shift from BSF to PERC crystalline solar cells to improve efficiency. The grey boxes in the figure represent the share of SHJ solar cells. It has been predicted by the International Technology Roadmap for Photovoltaic that by 2029 the market share for SHJ panels would increase up by more than 20 %. 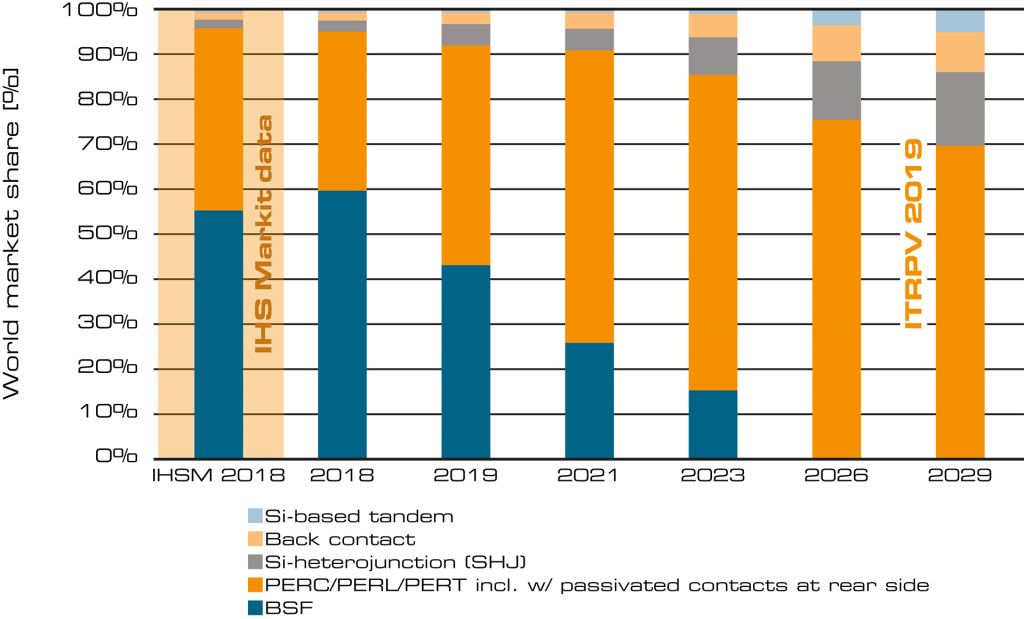 It has been predicted that by the end of this decade small-sized HJT cells could achieve as close as 28% in the laboratory which is quite close to the theoretical solar cell efficiency. (Shockley – Queisser limit of 30% - the absolute fundamental limit for crystalline solar cells). This technology is now much more mature and can compete with PERC solar cells that are available in the market more particularly on cost and in hot /humid environments. It is estimated that the market growth for HJT technology will be much faster than for traditional cell types and HJT solar cells will be readily installed on rooftops, thanks to their higher cell efficiency. Because they are already bifacial, they can also be installed in megawatt-size solar parks. HJT is an attractive technology and this technology already can be better than TOPCON, PERT, PERC technologies in terms of efficiency.