WHAT PV MODULES ARE MADE OF?

Nowadays, photovoltaic modules are known enough that there is no need to introduce them. However, the data of modules are mostly based on the electrical or mechanical part out of the technical catalogues, which led us to write something about the module elements.

Of course, you will find thousands of articles on the theory of photoelectricity on the Internet, which are not to be presented here. This article offers more practical information about common modules on the market.

In general, there are two different external aspects of modules; the back and front and the invisible interior. Either way, both make a difference, and their combination makes the module. A look at both and their components then becomes interesting. 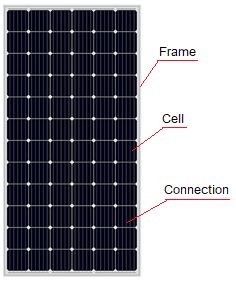 The characteristics may differ, but basically there is the frame as the structural foundation, glass for the cells and the connection protection, the cells as the heart of the photovoltaic transformers and the connections that conduct the energy provided by each cell to the module output.T he back view is made of an aluminium frame, Backsheet, Junction Box and Cable-Connector 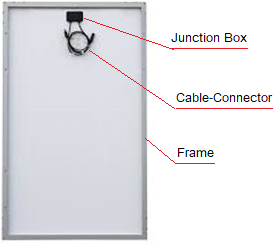 Depending on the area where the modules are installed, the external structure must be able to withstand different conditions such as wind, high temperatures, harsh environment, etc. The materials and sizes should then be strong enough. Here are some maximum resistance factors that are usually mentioned in the catalogs:

Now is the time to speak about the elements. Take a quick look at the picture. 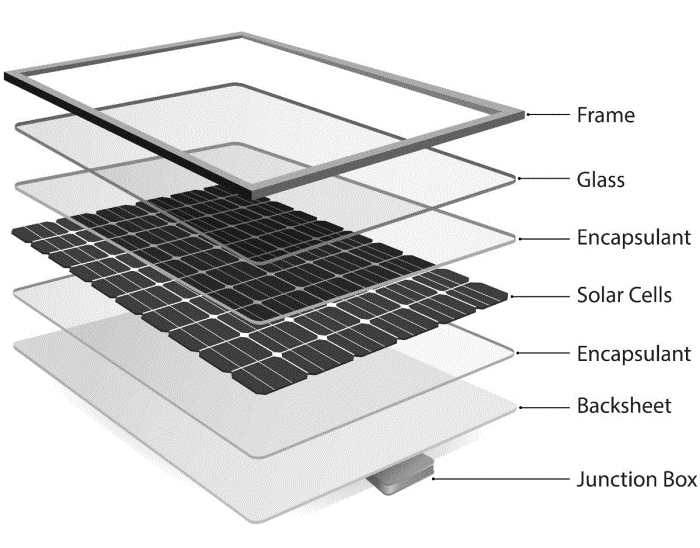 From top to bottom, after the frame comes glass, which should be anti-reflective to absorb as much irradiance on the module as possible. After that comes the front and rear encapsulation, which covers and protects the solar cells and connections. Then you see the backsheet as the backside protection of the module. All energy through the connections is conducted through connectors as a terminal to the Junction Box and finally goes out through cables as +/- poles.

Cells are exact converters of solar energy into electricity and some of solar energy is converted into heat. There are different types of cells depending on the material base and technology used in manufacturing, but all are semiconductors with the same principles. 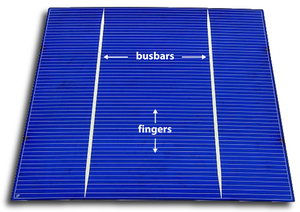 Fingers are connected to busbars because silicon is not a conductor. In other words, fingers and busbars are metallic, and the charges generated on the cell surface are conducted to the busbar through the fingers.

The cells can be monocrystalline or polycrystalline with a size of 6 inches per side and are usually made of silicon. Monocrystalline cells are more qualified and have higher efficiency and are specified in the market with black or dark blue color compared to the light blue of polycrystalline cells. However, there are other types of cells made of different materials, but silicon as the cheapest and most accessible material is currently the most popular.

Today, the most popular manufacturers, researchers, and engineers of semiconductors (silicon) try to modify them in the production technology or material blending.

The Junction Box (JB) is a bridge between a module and the output. It is therefore the transition gate for the produced energy. Inside a JB there are connections and bypass diodes that prevent the entire module from shutting down in case of partial shading. 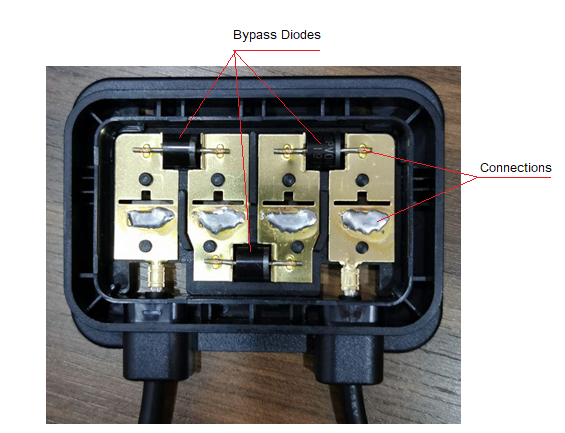 Mostly the modules consist of 60 or 72 solar cells in series and produce almost 0.5 V each. According to the principle of connecting electrical elements in series, the final voltage increases. Here you the side view of a series connection of solar cells to find the suitable voltage in the output.

If we now refer to the series connection of the cells, the series connection is interrupted and then the module shuts down if one of the cells is damaged or shaded. To avoid this, manufacturers make 3 strings on a module (on modules with 72 cells there are 3x24 cells and on modules with 60 cells there are 3x20 cells in series) and connect them again in series, but with a bypass diode between each two strings. This means that if one string fails, the other strings remain functional. 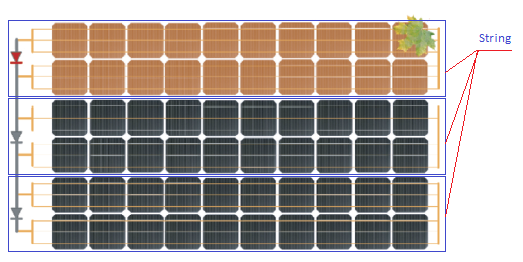 If we now refer to the series connection of the cells, the series connection is interrupted and then the module shuts down if one of the cells is damaged or shaded. To avoid this, manufacturers make 3 strings on a module (on modules with 72 cells there are 3x24 cells and on modules, with 60 cells there are 3x20 cells in series) and connect them again in series, but with a bypass diode between every two strings. This means that if one string fails, the other strings remain functional.

STC is an industry-wide standard to indicate the performance of PV modules and specifies a cell temperature of 25°C and an irradiance of 1000 W/m2 with an air mass 1.5 (AM1.5) spectrum. STC-based performance measurements are applied in the flash tests of many manufacturers.

The manufacturer's flash test is a part of the production line that complies with the STC. The technical data is then made available in the technical catalog used by the developers of solar systems. 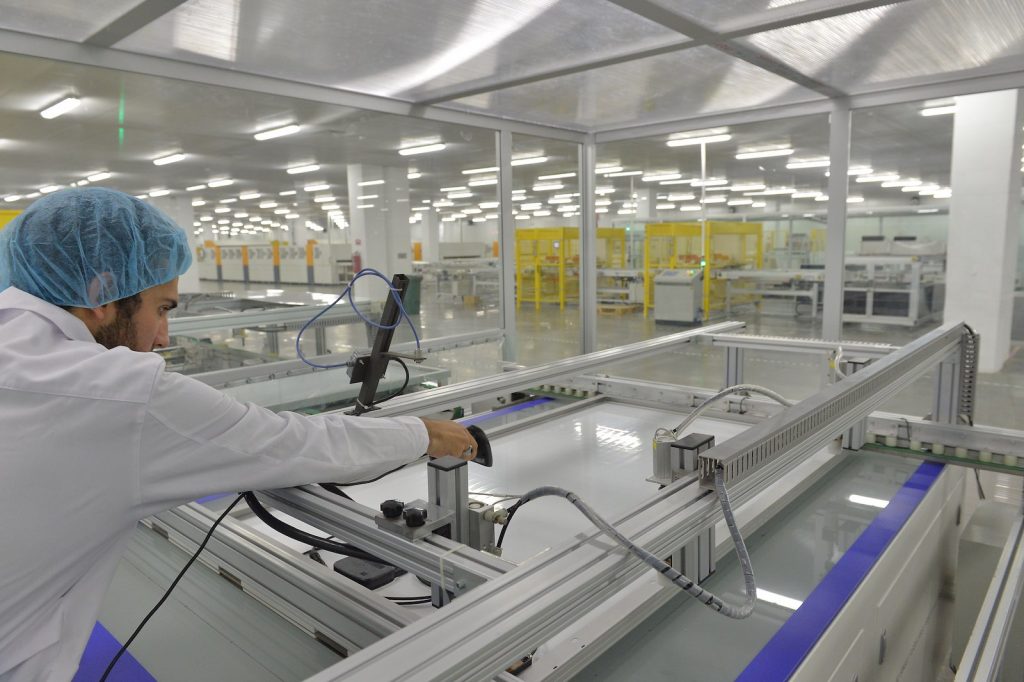 In addition, there are known standards that most manufacturers comply with to ensure the quality of their products. In the following, the most important standards are listed with number and title:

Manufacturers request a third trusted party (organization) to test their products according to standards that make clients trust in products that have been tested and passed the minimum requirements. Therefore, certificates from a third party could speak for the manufacturer who has passed the standards, compared to the others who have not passed them.

The simplest definition of efficiency is what percentage of the output is achieved in a system compared to the specific input. The efficiency of PV modules here represents how much solar radiation is converted into electricity.

Nowadays, more efficient modules are one of the most important issues involving scientists, engineers and manufacturers, along with the price that can be achieved, and everything depends on the quality of the elements.


Glass transparency make good irradiance absorption beside Anti-Reflection property what refuse irradiance diffusion. Also, transparency is a significant property of Encapsulant to conduct the most Energy to Cells.

Cell types could be another Module efficiency aspect what described fully.

Also, connections quality in Junction Box and Connectors (DC Cables) are important; because they are electricity transmitter and then high performance guarantee the most energy conduction and minimum produced energy dissipation.

Not only the front, but also the back of the module should be protected, which is the task of the backsheet. The white colour also protects the module against temperature rise and thus guarantees the operation of the module.

On the other hand, all gaps (such as the frame gap at the edge of the two-sided connectors) should be sealed with a suitable sealant to protect the module from water, dust, etc. Thus, if you refer to the manufacturer's specifications, a higher degree of protection provides a safer module in harsh environments.

Finally, high quality connectors and connections in the Junction Box provide us secure connection and high performance modules, which is appreciated by all customers.