Bifacial Solar Panels What are they and how do they work?

Traditional back-sheeted panels are mono-facial panels that generate electricity on the front side when photons impinge on them. Whereas bifacial solar panels can produce electrical energy when illuminated on both surfaces, front or rear.  A transparent rear generates additional energy, between 5% and 90% of the energy generated by only the front side. Bifacial solar panels and modules were invented and first produced for space and earth applications in the late 1970s. first demonstrations of bifacial solar cells and panels were carried out in the Soviet Space Program in 1974 and it entered the market and became a mainstream technology in 2010. Right now, bifacial modules are available at the same cost as compared to their mono facial counterpart. A bifacial PV panel generally consists of 60 or 72 solar cells. These solar cells have an almost identical metal grid at the front and back, with more than 95% of both sides available to capture light. Bifacial modules come in different designs. Some are framed while others are frameless. Frameless bifacial solar panels are considered to be more aesthetically pleasing.  Some have dual glass on the front and back sides while some have a transparent back sheet. Most bifacial panels have monocrystalline cells but there are panels with multi-crystalline cells as well. The same thing is that regardless of the design they generate electricity from both front and back surfaces.  Currently, according to the International Technology Roadmap for Photovoltaics bifacial solar panels have a market share of 20 % and it has been predicted that this will rise to 70% by 2030.

Figure 1: Forecast of the worldwide market shared for bifacial solar cell technology according to the International Technology Roadmap for Photovoltaic (ITRPV) –April 2020

The most common bifacial solar cell designs in the market currently include PERC, PERL, PERT, and IBC. The bifacility factor % is the ratio of rear efficiency to the front efficiency with the same irradiance.

Silicon wafers have traditionally been used as cell substrates. While mono facial cells require only one diffusion step when forming their single p-n junction, BSCs require two p-n junctions with different dopants. Monofacial panels have silver printed contacts on their front surface and for bifacial solar panels the solar panel's contacts are made of Ag/Al paste both on the front and back surfaces but with reduced metallization on the back side as seen in figure 2. However, the passivation of silicon surfaces is still needed. Silicon surface passivation is achieved by depositing silicon nitride (SiN) on both sides of the cell using plasma-enhanced chemical vapor deposition (PECVD), at 400° C. 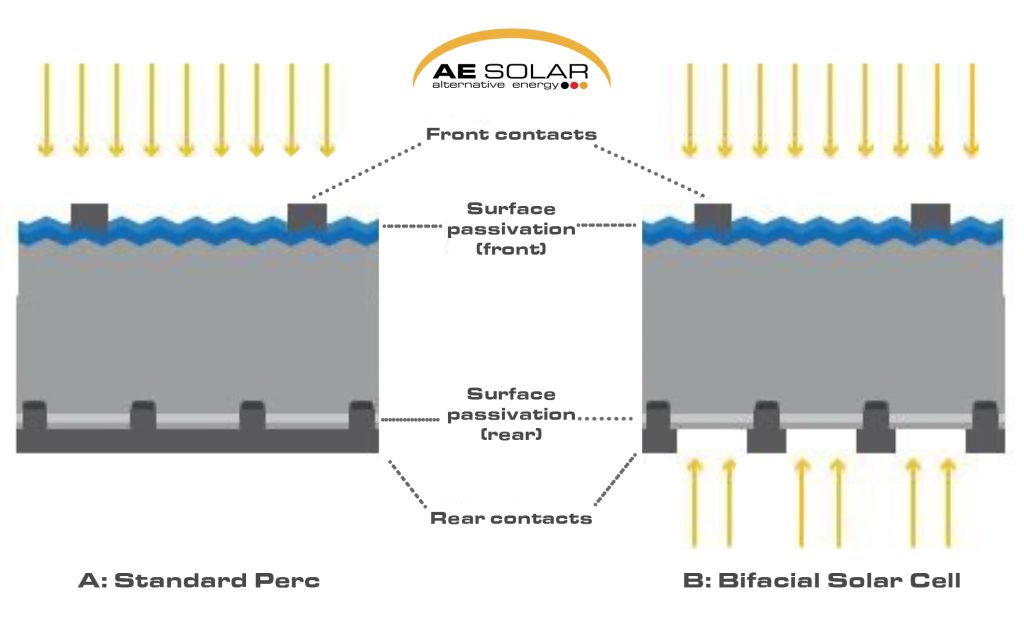 Bifacial solar panels are installed depending on the frame.  Framed bifacial solar panels are much easier to install than frameless ones, most bifacial panel manufacturers include their clamps to mount their products, so the installation becomes pretty much straightforward. AE Solar's COMET series are framed heterojunction half-cut bifacial modules. These panels have an operating power output ranging from 460- 480 W with efficiency ranging from 21.16 % to 22.08%. Figure 2 shows the technical data sheet of the COMET series manufactured by AE Solar. The bifaciality factor of the COMET series is 80+/- 5% which can be seen in the manufacturer's datasheet.