A solar system, like an automobile, is made of different parts, and each component should do its task properly. Getting the most energy from a PV array depends not only on module quality, but also on proper installation. To achieve the highest achievable solar energy, it is usually necessary to capture as much solar energy as possible and then minimize the waste of solar energy. This leads to a more efficient system and is possible if it is installed correctly.

The installation instructions, however, take up a few book chapters, but you will still find basic information that might be useful if you want to search for relevant references in greater depth. The Sun-Path article discusses different types of installations and considerations for installers to perfect the installation.

In general, the most energy can be achieved when the sun irradiance is perpendicular to the module surface. Of course, this is not always possible with a fixed mounting system, but for a perfect installation the path of the sun during one year must be taken into account.

In short, solar radiation becomes strongest at noon every day, which might be the best indication why, for a fixed mounting system, the solar radiation at noon should be perpendicular to the module surface and in the northern hemisphere, the front of the module should face south as zero azimuth. However, the exact south direction in the northern hemisphere (zero azimuth) is the best setting, but somewhere maybe a small distraction offers better conditions.

On the other hand, in relation to the different heights in the seasons, the module tilt should have the average value between 21 June as the highest height and 21 December as the minimum.

Finally, the yield of the solar system installed in KWh/KW represents the installation accuracy; in other words, a perfect installation in a given location will try to achieve a maximum energy in KWh per installed power array in KW.

Generally, there are two main types of installation with different branches.

Another factor is of course sufficient space for cleaning the modules, maintenance and installation. In other words, the arrangement of the array is also important.

Using London as an example, Figure 4 shows that PV has the highest altitude and then the highest irradiation in different months around noon towards the south. On the other hand, the lack of elevation and then also the irradiance is shown if it deviates from 0 azimuth. 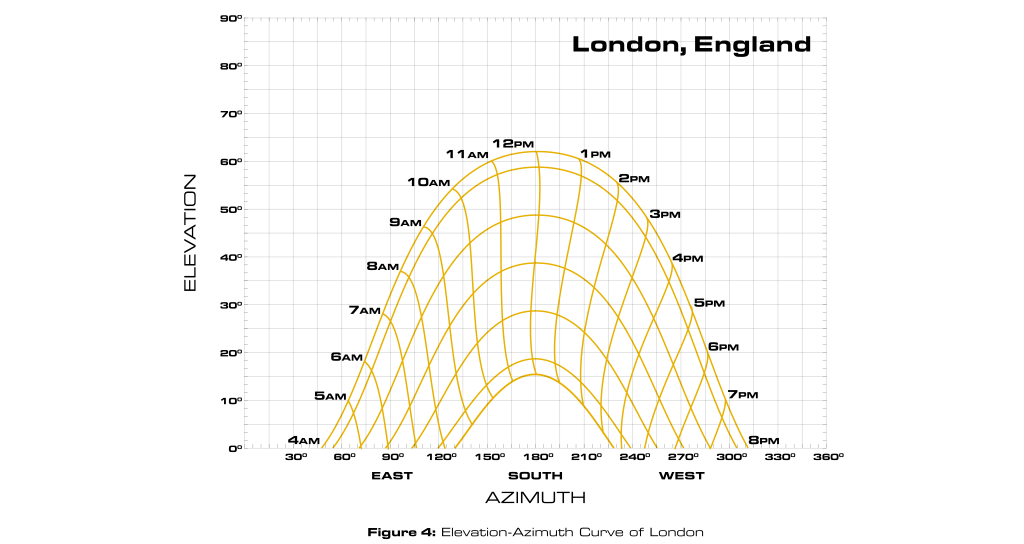 Depending on the shape and limited area of the roof, the modules should be arranged according to certain criteria. Pitched roofs have a simple scenario: in most cases, the modules should lie on the surface; in other words, the tilt of the modules will be like the roof tilt, but avoiding shadows is a general rule that should be taken into account. 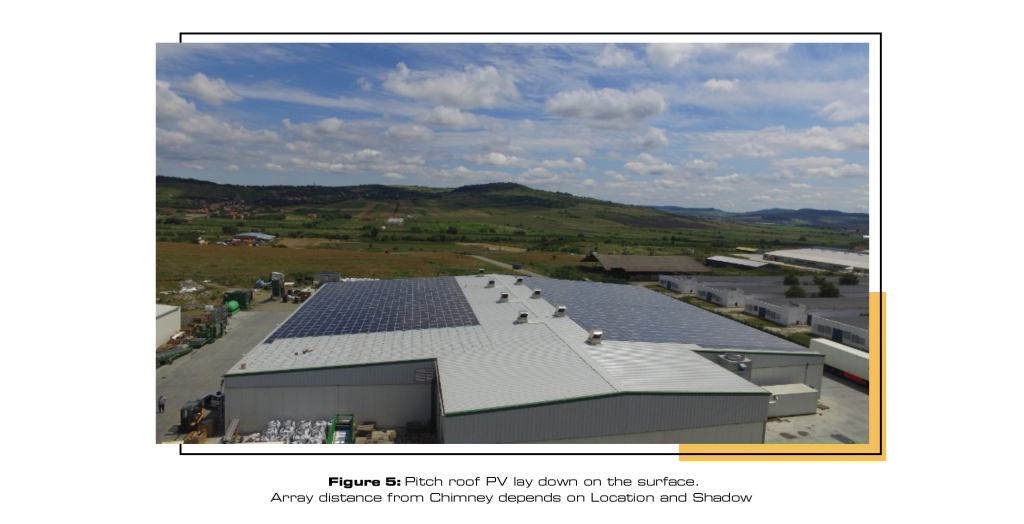 However, the concept of installation on a pitched roof is the same for all types, but if you refer to the roof material, the mounting method is different. It can be divided into two main types: Segments (Figure 4) and Rack (Figure 5). In the segment method, there are matrix arrangements in stands, but they are not connected to each other and modules are installed on them. In the rack method, there is a network of aluminum rails on which the modules are installed. 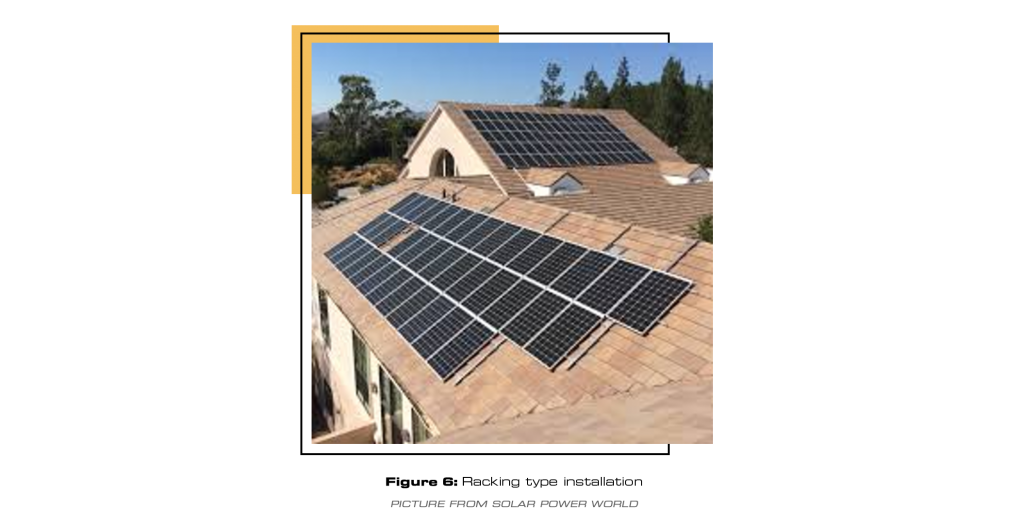 On the other hand, referring to pitch roof restrictions, Azimuth and Tilt depends on the roof shape and location. Just flat roof could be more flexible. 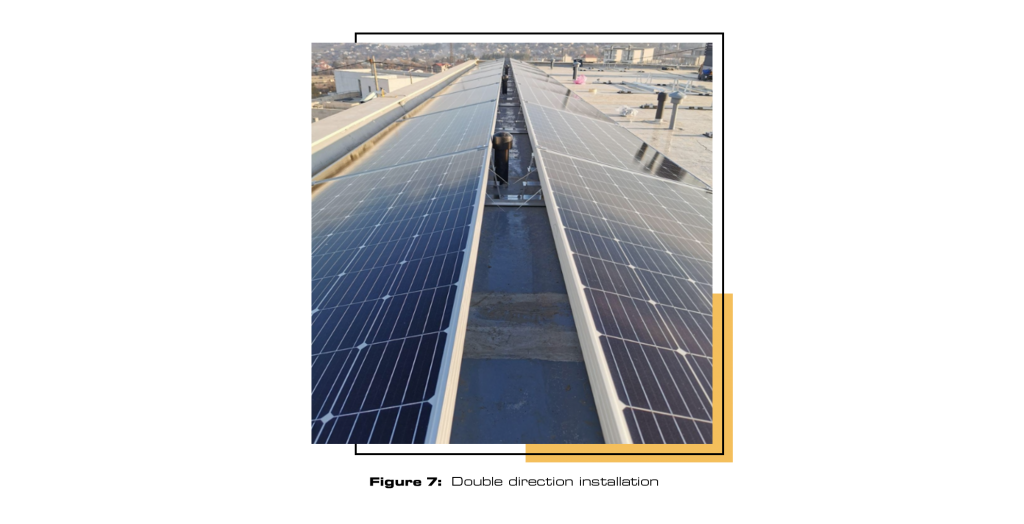 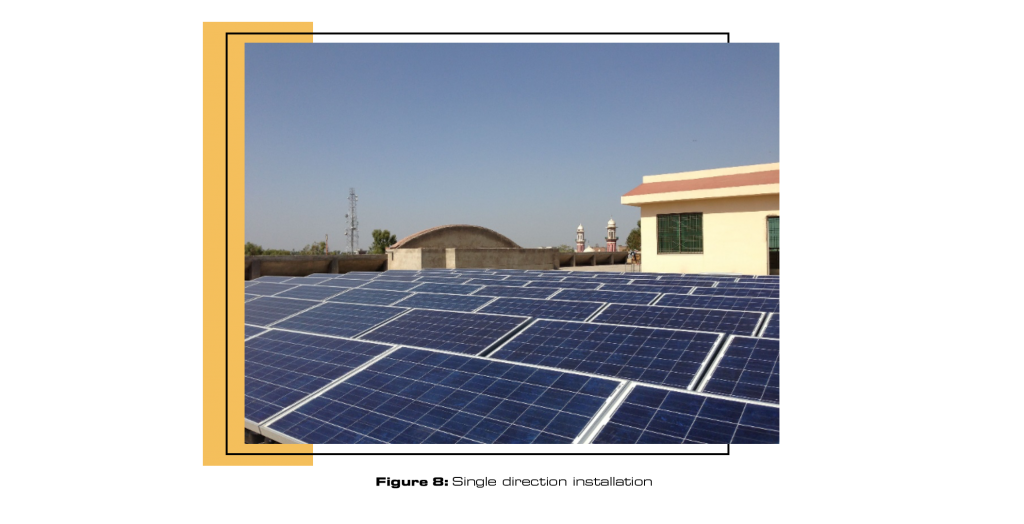 In principle, the arrangement of the modules should refer to the shape of the roof (Figure 7), but sometimes it can be different. Then the designer should decide which of two aspects is more important as a reference: azimuth or roof shape. In either case, an ideal roof is the roof oriented in geographical directions and then towards the northern hemisphere, a south-oriented array in one direction, or a two-directional array with two sides facing east and west. In summary, more geographical deviation results in less energy output.

There are two other important issues: loads and weights. The mounting on the roof must be very resistant to wind. On pitched roofs, the connections must be able to withstand the wind load, but on flat roofs they could be weighted down if drilling and bolting to the roof is not possible (Figure 9). Of course, the weighting must be done under observation of the inherent ceiling load. In other words, the maximum permissible load must be considered. However, the wind load can be calculated by graphics (Figure 10). 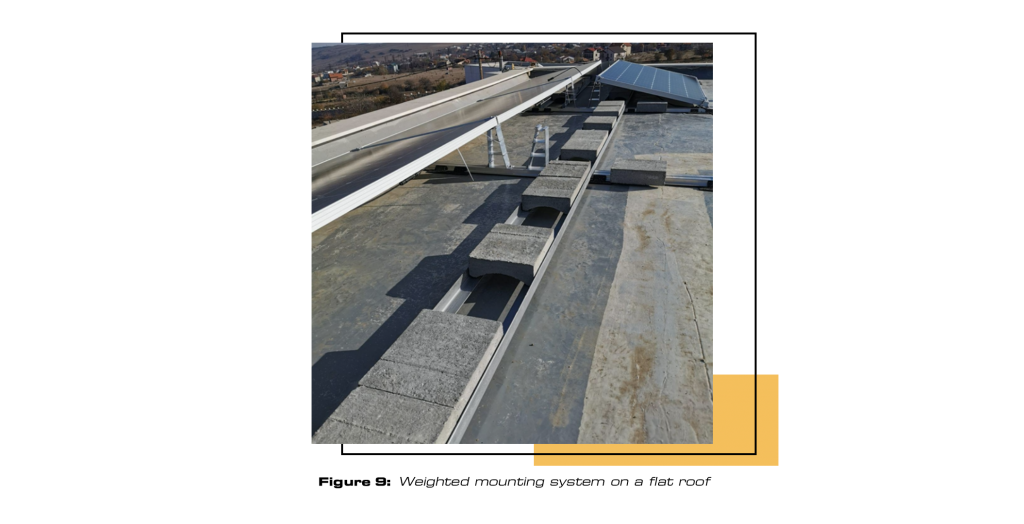 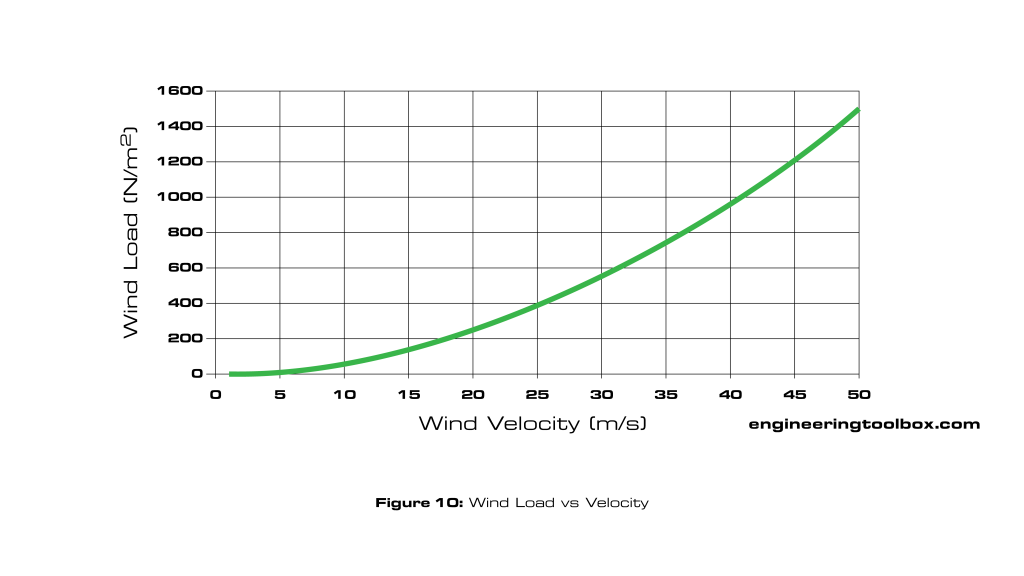 Basically, the concept of the Open Space mounting system is the same as that of the Rooftop. However, there may be more flexibility in the arrangement. 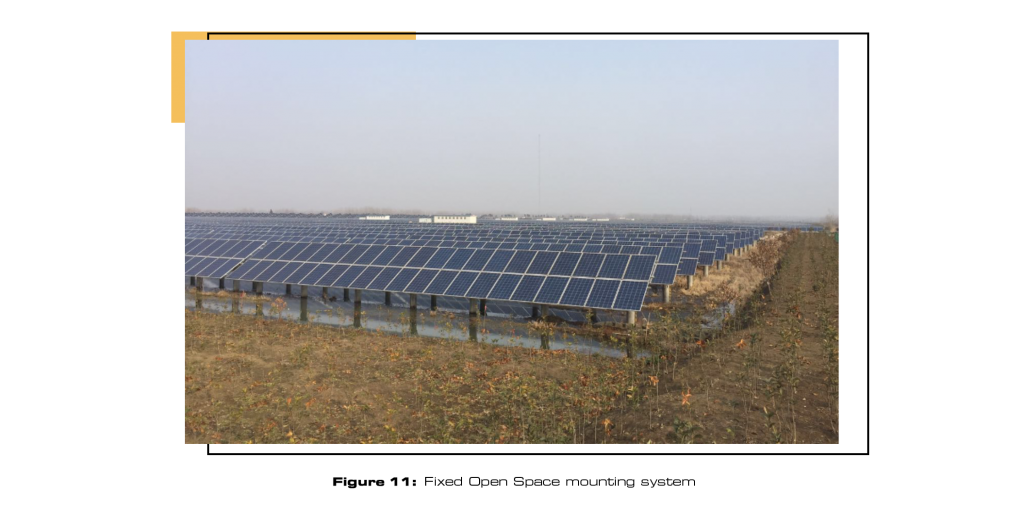 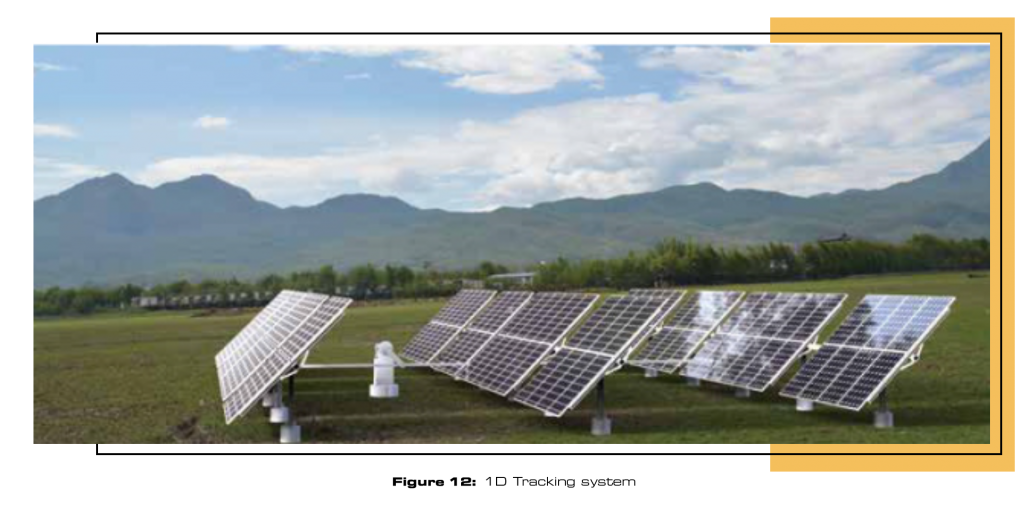 There are two different types: Fixed (Figure 11) and Tracking (Figure 12). There are two different types of tracking, 1D and 2D. A 1D tracking system only rotates around one axis and can then change the area on two sides, such as east-west; 2D tracking, on the other hand, rotates around two axes. The rotation around two axes allows an exact alignment to the sun and therefore a better efficiency of the mounting system, but the initial investment and periodic costs are high. The most important factor is the feasibility, which represents the energy production price compared to the costs.